Matrix Arms would like to preface this blog post by saying we understand that we know the term AR-15 stands for “Armalite” and is frequently used to describe rifles similar in design to the Colt AR-15 design. For purposes of this article, we will use the term AR-15 to reference the most popular semi-automatic rifles in the country, which are modeled after the Armalite and original Colt AR-15.

With that being said, how many Ar-15s are in the US? Approximately 20 million. They are frequently used in competitions and target shooting nationwide. AR-15s can be considered the Swiss army knife of firearms, suitable for range shooting, small to medium game hunting, and personal defense. Here are some of the factors to consider depending on your needs.

An AR-15 is commonly used for competition and target shooting in national matches. Some find AR-15s suitable for range shooting, small to medium-game hunting, and defense. Here are some factors to consider when looking at the best multi-caliber lower receivers, depending on your needs.

A cartridge’s stopping power depends on caliber, distance, the projectile’s kinetic energy, size, shape, weight, and shot placement. All these factors determine the stopping power of each caliber of ammunition and may change depending on certain variables.

For example; Joe Biden states that a 9mm Caliber bullet will “blow the lungs out” of humans when fired upon, which many experts (including a member of a U.S Marshal Fugitive Recovery Taskforce) feel that “that’s not even in the realm of possibility.” More mass, more speed, generally more deadly.

The weight of a bullet Certainly affects how the bullet performs, but the relationship between weight and velocity may not be what you think. Lighter bullets must travel faster to achieve the same kinetic energy as heavier bullets. With lighter bullets, you feel less recoil and improve accuracy due to the projectile rotating faster as it moves.

Heavier Bullets are more difficult to stabilize at slower speeds and require more charge (gunpowder) to move the increased mass at the same speed as a lighter projectile, increasing recoil. Different Calibers can perform differently with various barrel lengths. The Matrix Arms Multi-caliber AR-15 lowers are perfect for anyone looking to shoot different calibers, uppers, and barrel lengths, all on the same reliable AR-15 platform.

The Matrix Arms Multi-caliber lower receiver brings a high level of flexibility with the ability to shoot almost any caliber of ammunition that will fit into the mag-well and stay compliant with all of America’s communist gun laws at the same time!

Feeding a gun is almost like feeding yourself. Some of us prefer to feast on non-GMO vegan delicacies, while the rest of us not living in California may choose to slam Whoppers and Bud lights down our food chutes. Americans love choices, and the Matrix Arms multi-caliber lower receiver offers the ability for customers to have it their way! With multiple Caliber options to select from, you will have a better chance of finding the brand and caliber of ammo that works best with your AR-15. Be sure to check ammo availability before you invest in different caliber upper receivers. 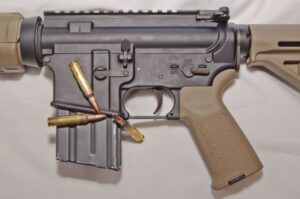 The .300 Blackout offers many projectile options. It burns full potential in a 9-inch barrel and cycles supersonic and subsonic ammo. Shorter barrels paired with suppressors can be a great choice for maneuvering in tight spaces such as buildings making it a great option for home defense.

The 6.8 SPC is a rimless intermediate rifle cartridge, initially aimed to replace the 5.56 for military use in an attempt to create a more lethal cartridge. The replacement failed. But the 6.8 SPC is an excellent alternative to the 5.56. Some call the 6.8 SPC a “6.8 mm Remington Special Purpose Cartridge”.

3. 6.5 Grendel
The 6.5 Grendel was originally designed to be a lower recoil- higher precision cartridge compared to its 7.62×51 sibling. It can perform more accurately at longer distances and with less recoil. It also carries more kinetic energy and better armor-piercing penetration at 1,100 yards.

4. .50 Beowulf
This cartridge is designed to increase lethality at short to medium distances compared to the .556 NATO. It is specially designed and produced under the control of Alexander Arms and Delta Firearms. This cartridge is typically used for tactical operations but has recently increased in popularity among hunters and recreational shooters.

5. .458 SOCOM
Like the .50 Beowulf, the .458 Socom is best suited to close to medium-range tactical operations that benefit from suppressed shooting. The cartridge can carry heavy projectiles for long distances.

Get AR-15 Calibers and Accessories at Matrix Arms

Are you considering maximizing your AR-15’s power, potential, and style? Get the best selection in Matrix Arms. Contact us today for more information.