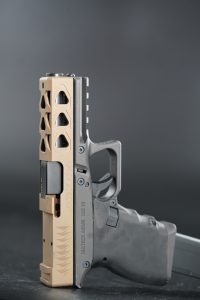 If you’re reading this, then we probably don’t have to tell you that the Glock™ is one of the world’s top firearms and an essential weapon for military and law enforcement agencies around the globe. The Glock™ has plenty of factors working in its favor, boasting unmatched reliability, a lightweight design, and an above-average magazine capacity.

But like any firearm, a Glock™ can only perform to its highest potential when it is properly loaded with the right ammunition. So, what ammo does a Glock™ use? You need to know exactly which Glock™ handgun you have to answer that question.

We’ve put together a handy guide to choosing the right ammo for Glock™ handguns, covering the most popular models made by the manufacturer.

Before you start browsing Glock™ ammo for sale, you should have a solid understanding of how bullets are measured. This means learning about the most important parts of ammunition and the purpose each serves:

As you look for bullets for Glock™ handguns, you can expect to see these key terms referenced regularly. Now that you’re familiar with what each one means, it’s much easier to be a confident and informed shopper.

There are many different ammo types out there, with a handful that tend to be the most common:

Of these common types of ammo, many are frequently recommended for Glock™ handguns. A few types are not on this list because they are far rarer, though they may occasionally be suggested for use with a specific Glock™.

What Ammo Does a Glock™ Use?

The right ammo for a Glock™ will depend on the specific handgun’s identity. In other words, you’re going to need to learn a little bit about which Glock™ you have to know what ammo to use with it.

Some of the most popular handguns by Glock™ – and the ammo they use – include:

Do you have a Glock™ that’s not on this list? Don’t make the mistake of simply guessing which ammo it requires. No matter what model you’re working with, the correct ammunition is a must.

The good news is that it’s pretty difficult to get the wrong ammo to fit in and fire from a magazine or handgun it’s not compatible with. Generally, you’ll realize you’ve made an error when the ammo doesn’t even properly fit. That being said, it can be possible – through pretty unlikely – that you do fire the wrong bullets from a handgun. In that situation, the best-case scenario is faulty performance, while the worst-case scenario is a damaged firearm or even an injury to yourself.

So, above all, make sure you choose the right ammo every single time.

Get Glock™ Parts and Accessories from Matrix Arms in Claremont, NH

Are you ready to maximize your Glock™’s power, potential, and style? Check out our outstanding selection at Matrix Arms of Glock™ aftermarket parts, accessories, and everything else you need to customize your handgun.

Get more information about Glock™ ammo and how to select the right bullets when you contact Matrix Arms today. 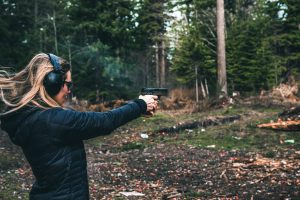 Originally, handguns were designed to be an easily portable means for self-defense in close-quarters combat – at the time, power wasn’t necessarily a priority. But fast-forward to modern-day handguns, and you can find more than a few high-powered options to choose from.

Although many gun owners still consider the handgun to be the go-to concealed-carry firearm for self-defense purposes, handguns have also become well-known as an exceptional weapon for hunting large game. So, it only makes sense that the world’s top gunmakers are leveling up the amount of power that is possible in a civilian handgun.

How the Power of a Handgun Can Be Measured

Before we introduce our picks for the most powerful civilian handguns on the market, let’s clarify a very important point: what’s the best way to measure how much power a handgun has?

You’ll often see a handgun’s muzzle velocity and energy used as the benchmark for power, but the pressure (pounds per square inch) generated in the barrel chamber is actually one of the most accurate determinants.

That doesn’t mean that energy and muzzle velocity don’t come in handy when you’re shopping for the best handgun to add to your collection. It’s just useful to be aware of the true measure of an exceptionally formidable weapon.

The Most Powerful Handguns Available Today

Since its 2003 debut, the Smith & Wesson Model 500 has been among the best handguns for sale today. Equal parts reliable, accurate, and durable, the Model 500 is a single-action/double-action pistol. Thanks to its unparalleled accuracy, it’s an outstanding choice for both hunting and self-defense applications alike, and investment delivers impressive value.

Of course, the .44 Magnum is a must on any list of the most powerful handguns. It can drive a 304-grain bullet up to 1325 fps, producing 1188 four-pounds of energy – despite only totaling 36,000 psi. Granted, this is often categorized among the more divisive handgun options, mostly because a fair number of people don’t particularly enjoy shooting a full-power .44 Magnum. But even so, it’s a hard-hitting handgun that can take down a fully-grown African buffalo, so it’s not surprising there are plenty of dedicated fans.

Technically, the .45/70 Government isn’t considered a revolver cartridge, and the manufacturer didn’t intend it to be. Instead, it’s really a rifle cartridge in an extremely large revolver. It clocks in around 28,000 psi, so it’s not the most powerful handgun from a sole pressure standpoint. But when you consider that it can take a 500-grain bullet to 1150 fps, not to mention generate 1468 foot-pounds of energy at its muzzle, the Magnum Research BFR definitely deserved a spot on the list.

The 475 Linebaugh is heralded as a highly powerful revolver cartridge, with 50,000 psi. It’s fairly comparable to the .44 Magnum, packing just a slightly more powerful punch. However, since it’s such a large caliber, you do have the advantage of a heavier bullet. A 420-grain projectile can hit 950 fps and produce 841 foot-pounds of energy, making for an ideal weapon for hunting large, dangerous game.

First developed more than six decades ago, the 454 Casull has long been labeled as a bit of a wildcat cartridge – that is, until it was chambered with Ruger’s Super Redhawk in the late 1990s. Now, this dynamic duo is a staple for handgun hunters, specifically those taking aim at big game animals. Its 65,000 psi of chamber pressure pushes a 325-grain (.45-caliber) bullet up to 1525 fps, for 1678 foot-pounds of energy.

Whether you’re on the hunt for the most powerful pistol on the market or you’re just looking for a no-frills handgun, Matrix Arms has the options you want and the unbeatable prices you deserve. Our collection of precision-quality firearms proves that innovation and affordability can both be possible – but only when you shop with the best in the business.

Not sure how to pick the perfect pistol for you? The Matrix Arms team is always here to help you navigate our products to choose the ones that suit your unique needs.